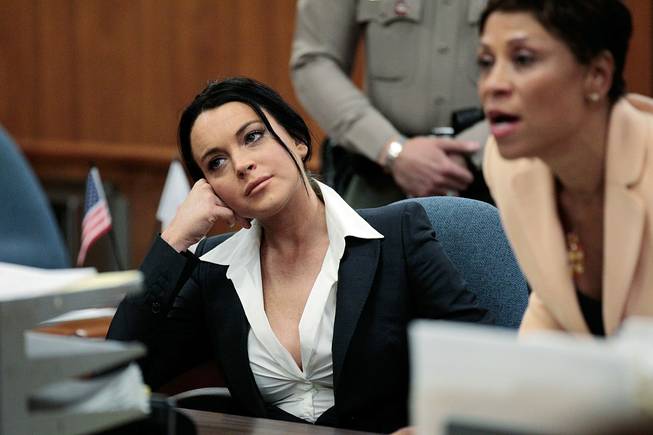 Lindsay Lohan sits in court before receiving her new accessory.

The Secure Continuous Remote Alcohol Monitor—aka SCRAM—is an unfortunate accessory, a bulky, black plastic device worn around the ankle like a chainless shackle. Last week, Lindsay Lohan was ordered to wear the SCRAM anklet, which automatically samples your sweat for alcohol every 30 minutes.

Chicken skin won’t do it

What about Spam? No, that won’t fool an ankle alcohol monitor either, say law enforcement officials.

For Lohan, there was immediate tabloid concern: “She’ll have to hide it under pants in the middle of summer!” Helpful advice: “Bedazzle it!” And blind optimism: “The bulky device will make her legs look skinny!”

In Clark County, the SCRAM device is nothing new. In the past four years, more than 2,400 people have been court-ordered to wear the anklet. On any given day, 180 residents are walking around Las Vegas with a SCRAM. Most are DUI offenders, though some are involved in domestic violence and assault cases where alcohol was a factor.

management tips. Don’t, for example, attempt to trip up the device by slipping a piece of bologna between the alcohol sensor and your skin. It doesn’t work.

Other things people have unsuccessfully tried to outwit the SCRAM with: condoms, paper towels, chicken skin. Peeing on your leg won’t do anything to stop the device, either. A Vegas man learned this, of course, when he tried.

Another bit of advice: Watch the perfume, lotion and mouthwash. Alcohol in beauty products can activate the SCRAM, a sensitive tattle: Testing results are wirelessly transmitted to analysts, who tell the authorities. (One local SCRAM wearer was scared out of his hair-gel routine.)

This is Lohan’s second time wearing a SCRAM. (The first time she volunteered, and wore it openly until a relapse reportedly prompted the removal.)

Dan Altvater, Nevada’s regional SCRAM manager, says the vast majority of local wearers are “compliant”—they don’t tamper with the anklet, don’t drink while wearing it and don’t shove cold cuts between their ankles and the device.